BeemCar has a drive unit that runs inside the beam, similar to a 1960’s French design called SAFEGE, using the same principle of operation with a fixed beam structure that has no complicated track switching and no moving beam parts, but the comparison stops there.  BeemCar’s drive unit is extremely light, as it has no motors or brakes attached to it, except for an emergency braking system – less weight to carry around and therefore, lower energy consumption.

The drive unit travels inside the beam on low friction wheels connected to the pod by the damped linkage, through which the pod is propelled along.  It is skeletal in appearance and designed to be lightweight and easily dismantled in situ, to facilitate removal of a pod in the unlikely event of a breakdown.

The drive unit has 3 frames, front, centre and rear, with the centre frame being the main structural part whose function is to support all other parts of the drive unit and pod, and through which all of the forces acting on the pod are resolved.  ‘Cruise’ LIMs fitted to the inside of the top of the beam act against a horizontal reaction plate, located at the top of the drive unit, to provide forward motion at a constant 50km/hr when the pods are travelling along the main beam. 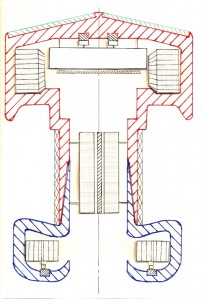 The reaction plate is positioned on the axis of the main support wheels to minimise force coupling.   When the pod goes off line into a station, the ‘cruise’ LIMs provide braking, supplemented by additional LIMs, located on the sides of the beam that act against a central vertical reaction plate on the drive unit.  When the pod leaves the station, these ‘booster’ LIMs accelerate the pod up to 50 km/hr before it merges with the main beam traffic.  The same principle is used for steep inclines.  Power is provided to the LIMs by high powered bus bars, moulded into the top of the beam, and low powered bus bars built into the lower parts of the beam provide the power for the on-board systems, including the HVAC.  Adjacent to these are smaller damped, side-acting wheels that provide stability in windy conditions.  A direction changing (switching) mechanism is attached to the front frame, which ensures the drive unit takes the correct fork at a junction in the beam.  An emergency braking system is attached to the rear frame, which when activated, slows the drive unit and pod in a very short time.