The problem of congestion and the associated air pollution is huge and solutions are difficult and expensive, as there is a finite limit to available road space in which to expand the capacity of existing modes of urban transport. Greener buses and light rail help, but even driverless cars are not immune to congestion. BeemCar has been designed specifically to tackle congestion at its core by providing a cost effective, zero carbon, energy efficient and attractive option to automobile users, as part of an integrated transport system.

BeemCar uses a mixture of existing technologies and can be compared to a cross between a monorail and ski lift. With the beam at least 7.5m above the ground, this provides a separate Right of Way (RoW), totally independent of the existing road space, with a theoretical maximum carrying capacity of nearly 30,000 passengers per hour on a single beam. Moreover, BeemCar is non discriminatory in that all pods cater for all types of passenger. 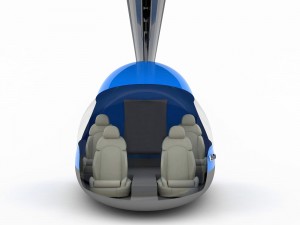 Each 4-seater pod is suspended from a drive unit that sits inside the hollow, lightweight beam, and is powered by linear motors, which provide the forward propulsion and braking. The pods zip along at 50 km/hr (30mph) on the beams that criss-cross the city in a network above the traffic. Much safer than a rail-based system, as there is no physical track switching and pods all travel in the same direction.

Unlike timetable dependent modes, BeemCar is available on demand and delivers passengers direct to their destination without stopping en route. This provides a more attractive option for automobile users to switch to public transport; no waiting around in the cold, or squeezing into crowded carriages and rubbing up against strangers. Journey times are halved, there are no polluting gases or CO2 emissions, noise pollution is low and relative energy consumption is less than a quarter. Also, BeemCar will provide comparable comfort, independence, privacy and convenience so prized by automobile users, but without the risk of accidents and traffic jams.

Passengers board the climate controlled pods at one of many ground level stops (no stairs or elevators), much like bus stops, set at locations based on passenger demand. The loaded pod is accelerated from ground level onto the main beam, where it merges with other pods all travelling in the same direction. All pods comply with international disability laws and are able to carry a wheelchair or mobility scooter, without modification or compromise.

BeemCar pods are energy efficient, as they move only when needed, aided by the solar panels integrated into the upper surfaces of the beam. With no driver, BeemCar is more than just a commute, with the choice of a relaxing or a more productive journey into work, and without the risk of committing a traffic offence, the stress of driving or of having an accident, the cost of which is indeterminate. Indeed, children can travel to school unaccompanied and safe, their parents knowing that the first and only stop will be the school gates.

BeemCar’s propulsion technology is based on well proven and reliable beam-mounted linear motors, which provide the option for BeemCar to travel much faster without any changes to the pod or drive unit, just by using more powerful motors. The downside of higher speed is the longer ramps needed for the acceleration and deceleration at stops. Higher speed means more space and increased cost for the ramps. As a result, a speed of 50kph (30mph) was chosen as being the optimum balance between an acceptable speed for passengers and the cost and size of the infrastructure.

As the current development is focused on urban transport, the content of this website covers this operating mode.

As BeemCar has the potential to travel at higher speeds, this option is being explored to link urban conurbations, which is known as an ‘Inter Urban Link’ to avoid any confusion with the term ‘high speed’.

Passengers would board a pod in an urban area that would take them through the network at 30mph, before it moved onto a dedicated Inter Urban Link, where it would be accelerated up to a higher speed – TBD, a speed acceptable to passengers determined by research, but likely to be around 95 – 135 km/hr (60 – 80mph). The link would be unlikely to have stops along its route, as deceleration and acceleration ramps would need to be much longer. However, branches off the main link could be added to connect to smaller conurbations along the route. Before reaching the destination urban area, the pod would slow to 50km/hr (30mph).

The maximum length of any Inter Urban Link will be dependent upon the speed and the maximum time a passenger could remain in the pod without needing comfort facilities, which, for example, would make possible a journey between Leeds and Manchester city centres. This could include branches off to Rochdale, Wakefield, Dewsbury and Huddersfield, for example.

There is also scope for this Inter Urban Mode to provide cost effective airport links, for example: a triangle joining East Midlands Airport to Derby and Nottingham, and a triangle joining Leeds Bradford International to Leeds and Bradford. In London, a direct link between the air sides of Heathrow and Gatwick could help determine a better solution for the future of London’s airports by creating a ‘Virtual Hub’ airport through better connectivity and improved utilisation of the combined London airports capacity, which could remove the need for an additional runway.

For example, passengers could travel from the ‘airside’ of a terminal at Heathrow to the ‘airside’ of a terminal at Gatwick or Stansted, without the need to go through security checks. At 100km/hr (62mph), it would take only 30 minutes to travel from Heathrow to Gatwick, less time than it takes to get from one Heathrow terminal to another, or from recent experience, from the aircraft gate to the baggage reclaim! In the same way, luggage and parcels could be transferred securely between the air sides in bonded, secure pods that remain sealed as they transit between the security-cleared parts of the 2 airports. Travel for passengers from the ‘ground’ side of one airport to the ‘ground’ side of another would also be possible, using the same beams.