The pod is suspended from the drive unit that sits inside the hollow beam, which instead of being a traditional rectangular steel or concrete box beam, is an ‘I’ shaped,  lightweight, carbon composite beam.  The physical properties of carbon lend themselves to this application, with carbon being much stiffer and lighter than steel.  Added to this, the ‘I’ shape is best for maximum stiffness, as evidenced by the shape of Rolled Steel Joists (RSJs) used in the construction industry.  This shape can be easily manufactured due to the ability to mould composites.

Tweaking the shape reduces visual intrusion and enables PV solar panels to be integrated into the sloping upper surfaces.  These will significantly reduce running costs and net energy consumption.  With carbon having a very low rate of thermal expansion, pods will have a smooth transition across the joints of the beam, and with the drive unit and motors being inside the beam, they will be well protected from the weather.  Moreover, unlike exposed elevated guideways, access will be extremely difficult for animals, children and thieves, who would find no cables to steal as these are built into the walls of the beam. 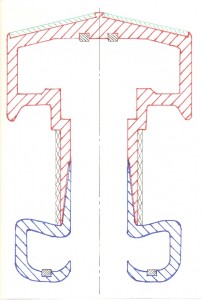 Although carbon is a more expensive material than steel, through-life costs are lower due to the reduced maintenance requirements, as the beam is non-corrosive and has negligible fatigue.  Increasingly, this has led the construction industry to use composite materials for similar structures.  Quoting from the National Group for Composites in Construction:

There are a number of examples of composite bridges that have been built since when the Aberfeldy Bridge in Scotland was completed in 1992.  The latest one, completed in December 2010 at Almunecar in Spain, is the world’s longest single span composite footbridge

The bridge was manufactured in one piece and was lifted into place in a mere 2 hours.  It has a span of 43m and weighs 25 tonnes;  half the weight of the equivalent steel bridge that would have taken much longer to install.  Apparently, the next project for the designers is a 200m single span bridge in Cuenea.

In 2009, the BeemCar composite beam was the subject of a scientific paper that was presented and peer reviewed by the National Group for Composites in Construction.

BeemCar requires very simple supporting infrastructure; just support posts with cantilever arms from which the beams will hang, and power feeds.  With a cross sectional area of about a tenth of the Almunecar bridge and measuring approximately 475mm x 650mm, BeemCar’s beam will be manufactured in lengths of 50m – 60m, with support posts located at circa 30m intervals.  Installing lighter weight beams and fewer parts (less than 5 tonne per length of beam) will require less craneage and temporary roads, resulting in lower cost and shorter duration installation.  Indeed, one of the advantages of composite beams is that they can be manufactured on-site, which saves time and money in transporting the beams from a factory.  Also, because of their low weight, they could be fixed to the sides of existing bridges, thus providing a low cost option to expand the capacity of river crossings.

Using a single beam cantilever is unbalanced, but there are many more advantages that acrue from this design that outway the disadvantages.  For example, it means the pathway under the pods is completely clear and is ideal for combined cycle and pedestrian paths under the beam as part of the design.  Unlike LRT and other ground based systems, BeemCar is less likely to be affected by flooding as the pods are at least 5m off the ground and with power supplies built into the beam walls, there are no power lines that could be brought down by bad weather.  Moreover, because of its ability to tackle steep inclines of more than 30º, BeemCar can provide planners with more route options.  Especially through hilly or mountainous areas that would not be suitable for other forms of transport.

BeemCar stops are relatively simple structures, similar in many ways to a large bus stop.  These will be set at intervals of between 500 – 800m intervals, depending upon passenger demand.  All stops are offline loops and therefore stationary pods will not hold up any pods following on behind.  Stops can either be at ground level, where BeemCar’s ability to tackle steep inclines means that the pods can travel down a sloping beam before coming to a halt.  These stops have the advantage of not needing stairs or elevators.  Alternatively, stops can be at the same grade as the main beam, typically, where stops are incorporated into buildings, such as large office blocks or shopping malls, or even at a height above the main beam, where demand exists.  Railway interchanges and stadii will be served by large BeemCar stations, with multiple berths and platforms, the design and capacity being tailored to the venue.

The PV solar panels integrated into the beam’s upper surface will have a coverage of approximately 400 m2/km of which at least 50% will be angled to the sun at any time in the daylight, resulting in generated power in the order of 50kw/km.