BeemCar uses modern, lightweight composite technology for the majority of its structural parts, based on the use of existing technology, proven in different applications across a broad range of industries, including the aerospace, rail, automotive and defence sectors – there is nothing new about the technology, only in the way that it has been brought together for this application.  The design of BeemCar is driven by the key focus of passenger needs, guided by the following philosophy:

BeemCar is not designed to replace other forms of public transport, but to be complementary and to work as part of an integrated transport system.

BeemCar is aimed at meeting the requirements of urban travellers, where there is the greatest need and the greatest potential through the development of linked networks, starting off with small routes and then linking them together.  Most importantly, BeemCar is aimed at providing an effective contribution towards reducing congestion and the associated problems it causes, by offering an attractive and viable option to automobile users.  Speed is restricted to 50 km/hr, as higher speed is unnecessary and leads to higher development, operating and maintenence costs. In addition, higher speed adds to the cost and size of stops, as longer ramps are needed for acceleration and decceleration.  Intercity travel is a totally different requirement and is best left to services designed to meet this need.

Much effort has been put into the design of BeemCar’s pod to meet passenger requirements and make it an attractive alternative to automobile users.  BeemCar has taken the approach that all pods need to be able to accommodate all types of  passengers, as it will operate in a dense urban environment where it wouldn’t be practical or cost effective to operate different types of pods for different types of passenger; people with disabilities, including wheelchair and mobility scooter users, parents with buggies, cyclists and families going on holiday.

BeemCar’s passengers are accommodated in 4 forward-facing fixed seats, with a large floor area between for the wheelchairs and buggies.  Just like in an automobile, the seats all face forwards, which is the arrangement that most aircraft and rail passengers prefer.  It means that all passengers (even those in wheelchairs) will have a good view out of the windows without having to turn in their seats.  In addition, it was also considered important that passengers could easily access pods, which is why BeemCar stops will mostly be at ground level, although there may be locations where a stop at the same level as the main beam traffic would be more suitable.  For example, stops in shopping malls or large office complexes, where the stops can be inside the buildings.

Composite materials were chosen for the beam because of the significant advantages they offer; predominantly passenger comfort, but very importantly, low visual intrusion and low installation and through life costs.  In addition, like aerospace, BeemCar has been designed to be ‘fail safe’, and with ‘lifed’ items – parts where failure would be catastrophic.  For example, a fatigue failure of the linkage between pod and drive unit would result in the pod becoming detached and dropping 5m with the possibility of serious injury.  These items deemed to be critical, would be tested to destruction and after applying a safety margin would be given a finite life to ensure they are replaced before they fail.  Monitoring of usage would be automatic.

Although less efficient than rotary motors, LIMs were chosen to minimise the number of parts that would have to be carried around as dead weight, using energy unnecessarily.  Less parts, particularly moving and complex parts, reduces maintenance costs and increases system reliability.

Maglev was considered but has not been used, as at 50 km/hr the advantages of Maglev are minimal and would be more costly than a simple set of very low friction free-wheeling support wheels.  The difference in energy usage between that used by Maglev and the energy needed to overcome the friction of the wheels is negligible.

There are a number of major reasons for choosing a suspended system instead of a supported system using elevated guideways or rails: 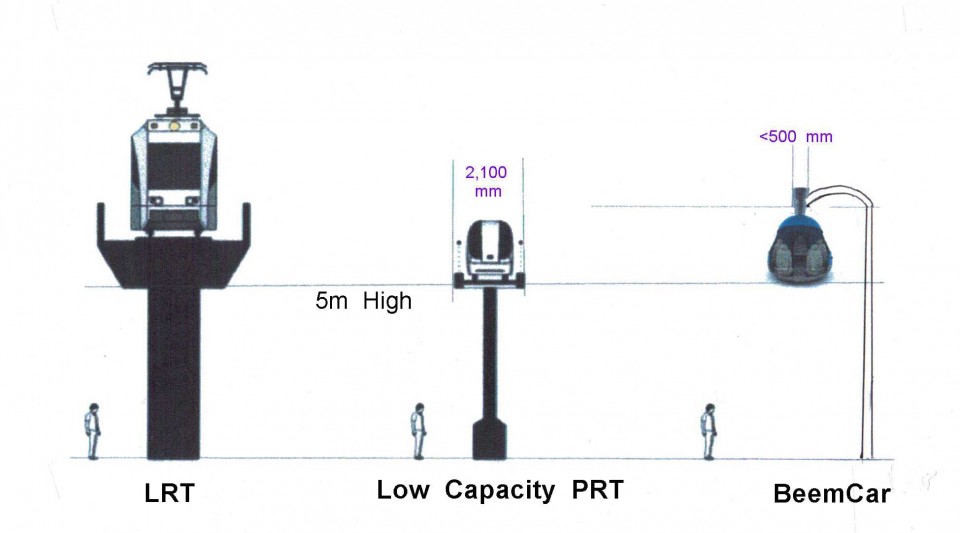 The H-Bahn at the University of Dortmund and Dusseldorf Airport, is an example of a suspended monorail, as is the Wuppertal Schwebebahn, which is a testament to the durability and longevity of suspended systems.  It is the world’s oldest monorail in its 113th year of operation, proving the concept and with an unbeatable safety record for a public transport system. 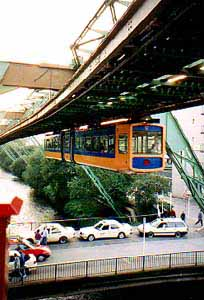