A Day in the Life of a BeemCar Pod

BeemCar has its own exclusive RoW that has no constraints and is not affected by flooding or bad weather. Its network of beams is set high above the streets where all road vehicles are crowded into the same shared space, criss-crossed by rail lines and constrained by traffic lights, one-way roads, roadworks and congestion. So how will a journey by BeemCar compare to that of an automobile? Consider a typical day in the life of a BeemCar pod operating on a full urban network.

Sitting in a car in congestion is time consuming and can be frustrating, whereas BeemCar passengers sit in relative comfort, able to work on laptops, talk or text on mobiles (without breaking the Law), whilst enjoying a coffee and listening to music. Whatever the weather, the built in heating and air conditioning provides a comfortable environment, whilst the large wraparound screen gives access to a panoramic view of the city.

Pods will automatically follow the most direct route through junctions, which have no points or other moving parts. As they approach their destinations, the pods will fork off the main beam and descend into their destination at street level, which could be a stop set within an office block or shopping centre. There could be stops at school gates that would enable children to travel unaccompanied.

Indeed, BeemCar journeys are cost effective in both time and money, making them attractive to automobile users. There are savings to be made on the cost of not having to buy fuel, no parking charges and no automobile ownership costs. Moreover, the overall journey time is generally less; no time spent sitting in traffic, finding a parking space and walking from the parking area, with the bonus of contributing zero CO2 emissions or pollutants into the atmosphere.

BeemCar is not designed to break any speed records but to provide a safe, secure and reliable system of transport, travelling at a constant speed of 50km/hr, faster than most congested traffic.  Also faster than buses and LRT, which cannot provide the same level of service as BeemCar, due to route limitations and fewer but more frequent stops.  This is illustrated in the comparison below between the limited fixed ‘corridor’ based system, such as LRT, to the more flexible network based system used by BeemCar. 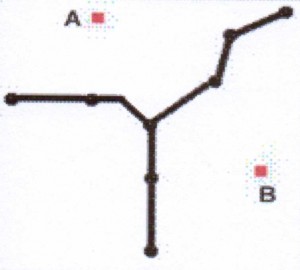 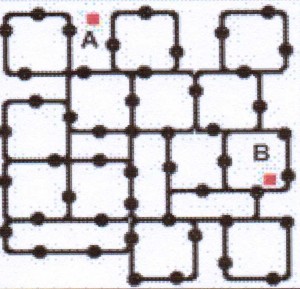 A study carried out in Seattle illustrates the advantages of a network.  The study compared the percentage of residents that would be accessed by a LRT, corridor based system, with a network based Personal Rapid Transit (PRT) system, based on a population of 6,000 people per square mile over an area of 8 x 8 mile (circa 384,000 people).  It discovered that only about 8,000 people – 2% – were within walking distance of an LRT station.  In contrast, there were over 250,000 people – 67% – within walking distance of a stop on the network based scenario.  This is because a network covers a much larger area and there are many more access points onto it.  The costs of both options were similar.

A corridor based system relies upon passengers coming to common starting points, travelling to the same destinations and being shunted all together in large vehicles at fixed times.  This creates high passenger volumes at the stations, and choke points.  In reality, passengers originate from many different starting points, usually wanting to go to different destinations at different times.   Using automobiles enables people to travel more direct, and if there wasn’t congestion, then this would be the most efficient means of transport, although not the cleanest or most energy efficient.  This is where BeemCar operating on a network is a significant benefit, as it can deal more effectively with a large number of commuters because of the spread of starting points, final destinations and different pick-up times.  BeemCar will pick up people nearer to their preferred starting point, and deliver them nearer to their final destinations without any hold-ups.  However, where necessary, BeemCar can still cope with large numbers of passengers in a short time period, such as at railway stations or stadii.

BeemCar system capacity is a function of the number of pods, and headway – minimum distance between pods in motion.  With a half second headway, BeemCar will support a theoretical maximum throughput of 7,200 vehicles per hour on a single beam, all travelling in the same direction.   With 4-seats, the theorectical maximum capacity on a single beam is 28,800 passengers per hour, nearly 60,000 for a twin beam with 2-way traffic.

However, like with trams and buses, pods will not always run fully occupied, and in peak times when the passenger flow is generally in one direction, for instance from residential areas into the work areas, there will be a percentage of returning empty pods.   Realistically, the initial average pod occupancy is likely to be the same as that of automobiles, an average of 1.6 in the UK for 2009 (taken from the UK Office for National Statistics).  This would give a nominal throughput of circa 8,000 passengers/hour if the percentage of returning empties is 30%.  Using behavioural techniques to increase localised sharing could see occupancy rise to over 2, which would result in a more realistic throughput of circa 10,000 passengers/hour, or 20,000 passengers/hour for a twin beam installation.

Considering only a single or twin line – ‘corridor’ – is not an accurate representation of a network’s carrying capacity when it extends in all directions.  A better way is to consider the total number of people served by the entire network, which will be dependent upon the number of pods in circulation, and crucially, the passenger flow and number of journeys per hour.  These criteria can make the difference between being profitable or not, the key element being the density of population from which the passengers will originate.  When planning a system, it is imperative to predict passenger numbers and flows before building the system and setting the fares.  However, a balance has to be struck as high fares will put off some travellers, thereby reducing the opportunity to make a profit.

Most public transport systems struggle with steep gradients, but because BeemCar is a suspended system with a single articulated point of suspension, it is able to tackle very steep inclines, typically greater than 30º (60% gradient) – similar to a ski lift.  The advantage to passengers is that the pod will always remain horizontal, whereas if the pod was suspended from more than one point, the angle of the pod would change with the angle of the beam.  This would cause passengers to suffer the ‘roller-coaster’ effect when the pod transitions from one angle to another at the summit.  The maximum gradient is a function of the design when deciding on the route.  The length of the linkage and the strength of the linear motors would be governed by the maximum gradient.  This ability to tackle steep inclines means that stops can be at ground level, taking away the need for stairs and elevators.  Also, it provides planners with more route options, as transit systems that run on elevated guideways or rails tend to be limited to about 10º and multipoint suspended systems also have limited climbing ability – less than 12º (20% gradient).

Small pods are inherently safer and more secure for lone travellers than large, empty buses or train/tram carriages. Once on-board a BeemCar pod, the door will close and lock, with a fail safe mechanism that prevents inadvertent opening during travel. Discrete CCTV will record any on-board activity and 2-way comms can be activated for emergency situations. Systems have been developed to deter intruders and provide added protection to vulnerable persons travelling alone.

As pods go direct to their destinations, they are ideal for the school run, giving parents more time and greater peace of mind, as the first stop for children would be the school gates.   Given our aging population, it is important to ensure the older generation are able to access suitable public transport, such that they are able to get out and about.  All BeemCar pods are able to meet the needs of all elderly and disabled persons, providing a safe and secure means of transport that will maintain and even improve their Quality of life.

Pods will be manufactured using fire retardant materials, and will have a structural reserve factor, similar to that used for aircraft.  Also, only low power sources will be used on the pod, therefore reducing the risk of fire even more.  Overnight storage of pods will be on beams more than 5m off the ground, putting them out of reach of vandals.

To provide for global operations, pods have been designed with independent power supplies for heating and air conditioning, and propulsion, such that failure of one system will not endanger passengers.

As BeemCar could be deployed to many parts of the world where there is a risk of earthquakes, the design has been developed to take this into account and has introduced techniques to minimise the risk to passengers.  For example, the design of the pod’s interior is key to minimising injuries, so sharp edges and corners have been eliminated.

The pods will be built with robustness and reliability in mind, and a long Mean Time Between Failure (MTBF).  Consequently, the incidence of breakdown is deemed to be extremely low and the use of non-corrosive composite materials will minimise through life maintenance costs.  Moreover, major causes of accidents and delays on traditional rail systems are points, signals and human error, none of which apply to BeemCar, as there is no track switching at junctions, no requirement for signals, as control is automatic, and no drivers.  Historical data from existing monorail and PRT systems (particularly the Wuppertal Schwebebahn and Morganstown) shows that the probability of incidents is practically zero. However, a system has been developed to ensure timely rescue of passengers, should the need arise.